Terrible news. Easy to go paranoid in this world.

At least nine people have been killed in a shooting at a supermarket in New York state, US media report.
Police are at the scene in the city of Buffalo and say a suspect has been taken into custody.
Officers believe the gunman entered the supermarket on Saturday afternoon before opening fire with a high-powered rifle, the Associated Press reports.
Multiple people were shot in the incident, police said, without giving further details.
But unnamed law enforcement officials told several media outlets, including the BBC's US partner CBS News, that at least nine people had been killed.
Police are expected to give an update in a news conference later on Saturday.

Speaking to CBS, a police source said the detained suspect was a white male who allegedly shouted racial slurs during the attack.
The Buffalo News, meanwhile, reported that the suspect wore a camera and body armour as well as a "military grade helmet".
It said police were investigating whether the suspect livestreamed the attack.
New York Governor Kathy Hochul said she was monitoring the situation and urged residents to avoid the area.
Click to expand... 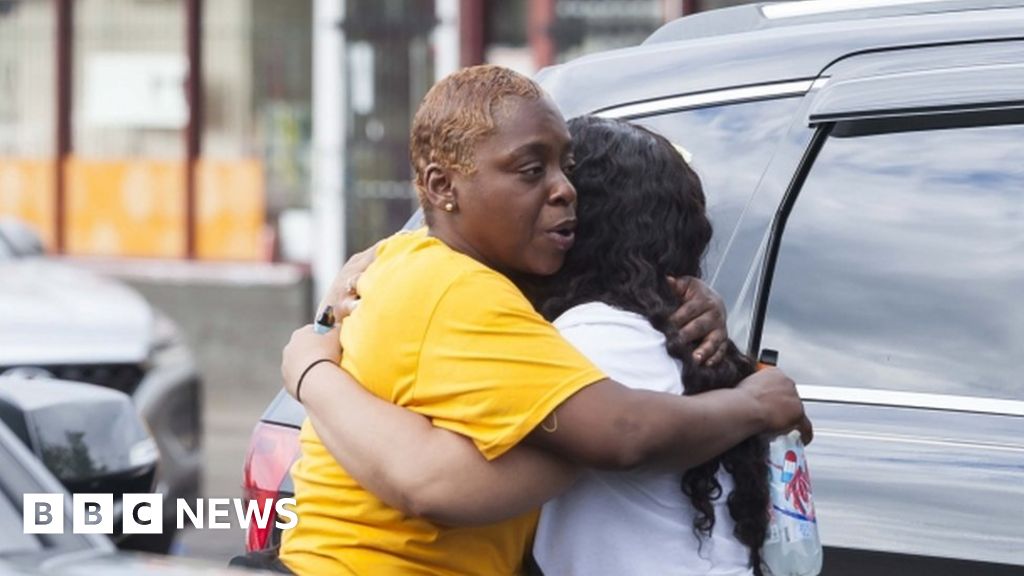 An 18-year-old is charged over the New York state attack, which is being investigated as a racial hate crime.
www.bbc.com

His manifesto is indistinguishable from the monologue of Tucker Carlson’s show. It’s similar to what most Republican candidates running for public office are spouting off. Hate speech and racism have consequences. For some? That means millions of dollars or public office. For others? That means becoming a shooter. And for the rest of us? We’re being held hostage by an extremist and authoritarian political movement that controls our media, courts, and most state governments.

Here’s the shooter citing great replacement theory in his manifesto.


And here’s JD Vance, the Republican nominee for senator in Ohio. Since Ohio is a very red state so he’s most likely going to be elected to be one of 100 leaders from this country. And here he is, promoting the same racist “white replacement theory” garbage that human gas bags like Tucker and this shooter espouse. He’s subtle, but do you notice how he talks about immigrants bringing death in the form of drugs AND replacing the (white) electorate? Check it out:

So just like the South Carolina church and El Paso Walmart a few years ago, another nut who consumes too much Fox News has become radicalized and decided to kill fellow Americans. Thank a Republican for this! Donate to the NRA so they can continue to flood our communities with military grade weapons. They’re contributing to these idiotic gun laws, the nonstop division and hate, and for fanning the flames of racism and white replacement.
Last edited: May 14, 2022

On your mark, get set, thoughts and prayers!

Avery said:
Let me guess, a ‘lone wolf’ is how he will be portrayed by some douchebags.
Click to expand...

Nope. The douchebags are portraying him as just like Tucker Carlson.

Avery said:
On your mark, get set, thoughts and prayers!

Let me guess, a ‘lone wolf’ is how he will be portrayed by some douchebags.
Click to expand...


Compare this segment with the manifesto. He literally quotes Tucker throughout, even to the details of saying “all the liberal gatekeepers on Twitter.” Like the entire first minute of Tucker’s speech here reads almost word for word with the manifesto.


But again, I’ve been told that this rhetoric doesn’t have consequences. Other than keeping a large segment of our population angry and glued to Fox News and keeping Tucker on tv. No one would ever take what he has to say seriously… right???

106-page online manifesto, believed to have been uploaded by the shooter, explained that he was motivated by a conspiracy theory that white people are being replaced by other races. In the document, he says he is 18 years old and a self-described white supremacist and anti-semite.

“If there’s one thing I want you to get from these writings, it’s that White birth rates must change. Everyday the White population becomes fewer in number,” the document says. “To maintain a population the people must achieve a birth rate that reaches replacement fertility levels, in the western world that is about 2.06 births per woman.”
Click to expand...

Don't be silly. No one is comparing the shooter to Carlson. Carlson isn't sincere enough to shoot up a supermarket.

Always go for the head. Thanos taught us that.

Unfortunately, the livestream of this can be found online. It’s not gory, but it’s absolutely graphic and will be a central focus on his trial.

I don’t believe NY has the death penalty so he’ll be locked up for life. I’m frankly surprised he didn’t pull the trigger on himself.

Avery said:
Unfortunately, the livestream of this can be found online. It’s not gory, but it’s absolutely graphic and will be a central focus on his trial.

I don’t believe NY has the death penalty so he’ll be locked up for life. I’m frankly surprised he didn’t pull the trigger on himself.
Click to expand...

Sounds like a fed hate crime, punishable by death

Nothing adds more empathy and class than Donald weighing in… and to think, there are fellow posters on here who would like nothing more than to give this mentally ill incomplete human being narcissist 4 more years. You can’t be a good person and support this piece of garbage.

So many Republicans endorse white replacement theory. Why?