2019 Award Winner
I don't think we're significantly less ****ed up here but at least these arseholes can't get guns.

The Thriller said:
So many Republicans endorse white replacement theory. Why?
Click to expand...

The single most prominent white nationalist leader is Richard Spencer, and he endorsed Joe Biden after Bernie dropped out. There is video of Spencer giving speeches in which audience members are literally doing the Nazi Roman salute with their arms. 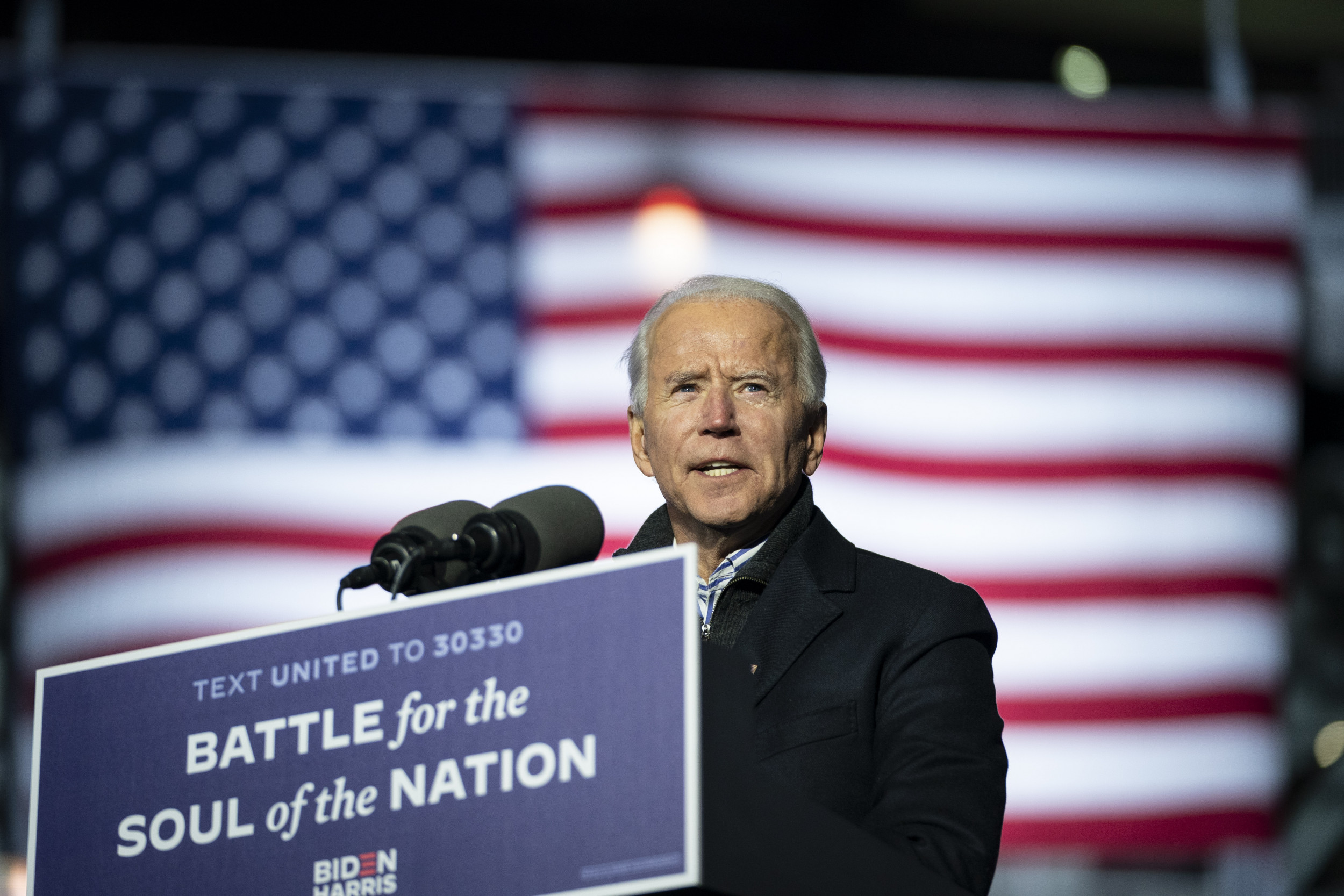 "To hell with libertarian ideology," Richard Spencer tweeted Tuesday. "I'm a libertarian when I want to be."

Richard Spencer isn’t an outlier. The organizer of the Charlottesville rally where morons carried tiki torches while chanting “Jews will not replace us’ was Jason Kessler, a long time and very active democrat. Per the left-leaning Washington Post:

A decade ago, [Jason Kessler] worked the phones at night for Secrest Strategic Services, the now-defunct Democratic polling outfit. He voted for Barack Obama in 2008. He spent time at the Occupy Wall Street encampment in Charlottesville in 2011, until he was kicked out for trying to register homeless people
Click to expand...

In this post, The Thriller seems to be following the dictates attributed to Joseph Goebbels; “Accuse the other side of that which you are guilty”.

Rubashov said:
I don't think we're significantly less ****ed up here but at least these arseholes can't get guns.
Click to expand...

I think our lax gun laws and sick gun culture definitely contributes to the situation we have. But the main catalyst is right wing extremism exploiting racial animosity and fear.

* You can’t have a president who calls Mexicans rapists and murderers without consequence.

https://www.washingtonpost.com/poli...c0725c-f711-11e7-91af-31ac729add94_story.html
* Your entire 2018 midterm strategy can’t be about scaring the country over a caravan of immigrants/asylum seekers without consequence. (Notice, Fox News hosts and viewers couldn’t let the racism go. To them it wasn’t just a midterm strategy)

Trump Shut Up About the Caravan After the Election. Fox News Can’t Seem To Let It Go.

The RNC, Infowars, and the president all moved on right after voters had been scared to the polls.
www.thedailybeast.com
* You can’t purposely separate migrant children from their parents, purposely creating a nightmare situation at the border, to act as a deterrent against immigration, without consequence. 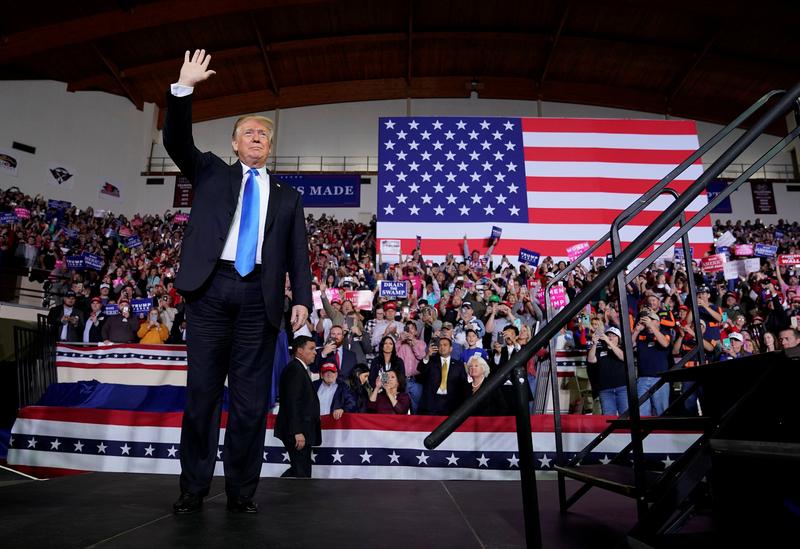 U.S. President Donald Trump said on Saturday that separating migrant families at the border could deter illegal immigration and that he was considering several options to tighten border security.

* You can’t have the mentality to treat fellow human beings like this and build an alligator moat without consequence: 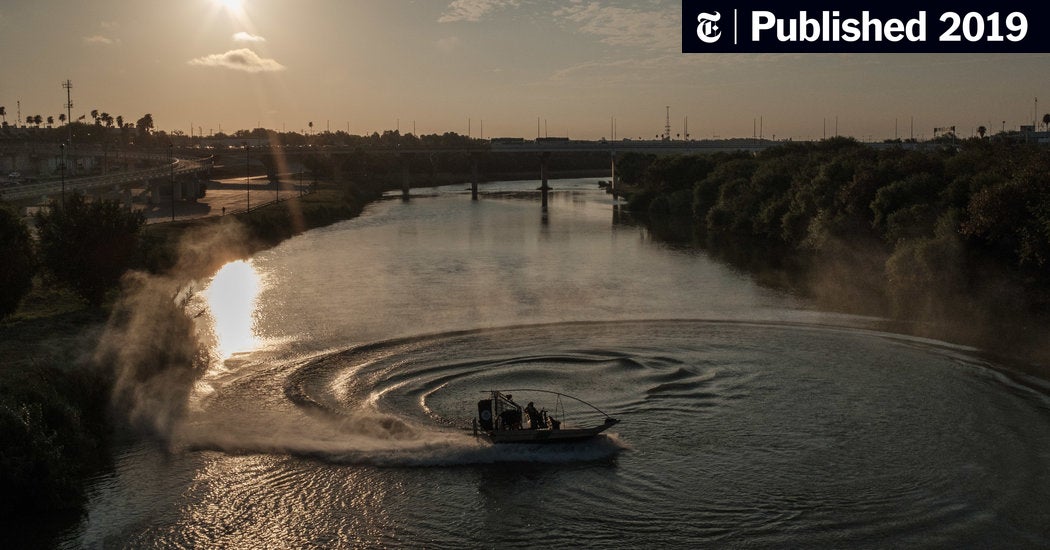 Over a frenzied few days in the spring, an internal White House debate led to turnover in staff and a turning point for the president’s immigration agenda.

* You cannot claim that the 2020 presidential election was stolen by POC without consequence. 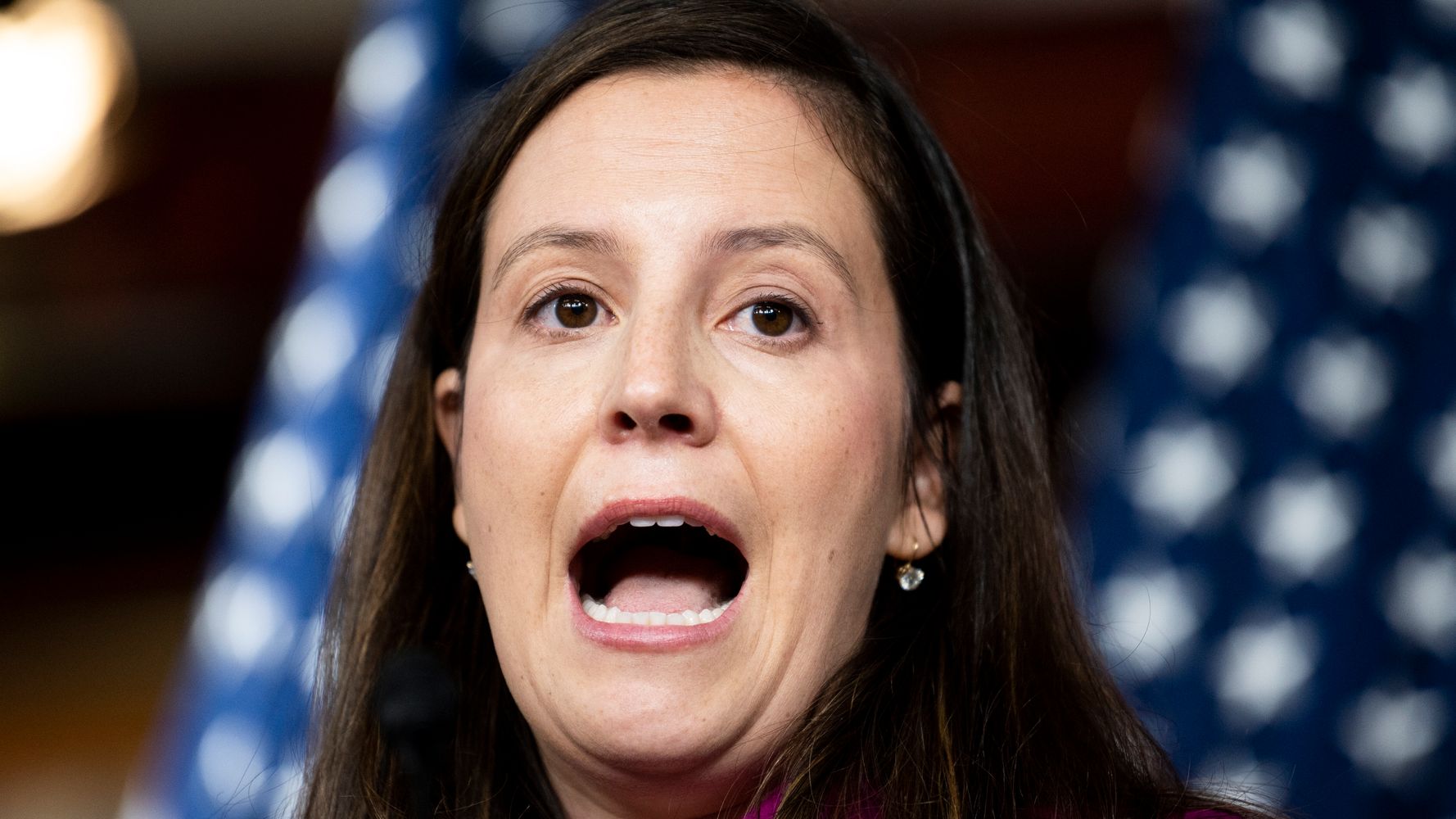 The New York Republican also argued against providing formula for migrant's babies and saw no contradiction with describing herself as "pro-life."

* You cannot endorse white replacement theory to millions of Americans without taking into account that you’re radicalizing some Americans to take matters into their own hands.

We all ignore right wing Republican hate speech and radicalization at our own peril.

For republicans, this is just another page in the story against their political enemies and the “impure” and “non-American” people trying to take over the country.

Whether we’re talking about “the caravan invasion”, “The Big Lie”, or “Biden hoarding baby formula for immigrants.”

The narrative is clear, white conservative evangelical Americans are under siege against doctors, public school teachers, the LGBT community, liberals, and POC and immigrants. It’s why just a few weeks ago we were seeing men trying their private parts on Tucker’s show; it’s all part of the narrative that America is losing something and we must “take it back.” In that case, manhood and manliness, back. It’s what gives life to the “White Replacement Theory” so popular among Republicans today.

This is an important thread:


And it’s important to know where millions of your fellow Americans are learning about white replacement theory from:


He’s not the only one. Read this, is it any wonder why we have mass shootings like the church in South Carolina, synagogue in Pittsburg, dance club in Orlando, El Paso Walmart, Kyle Rittenhouse, now Buffalo? 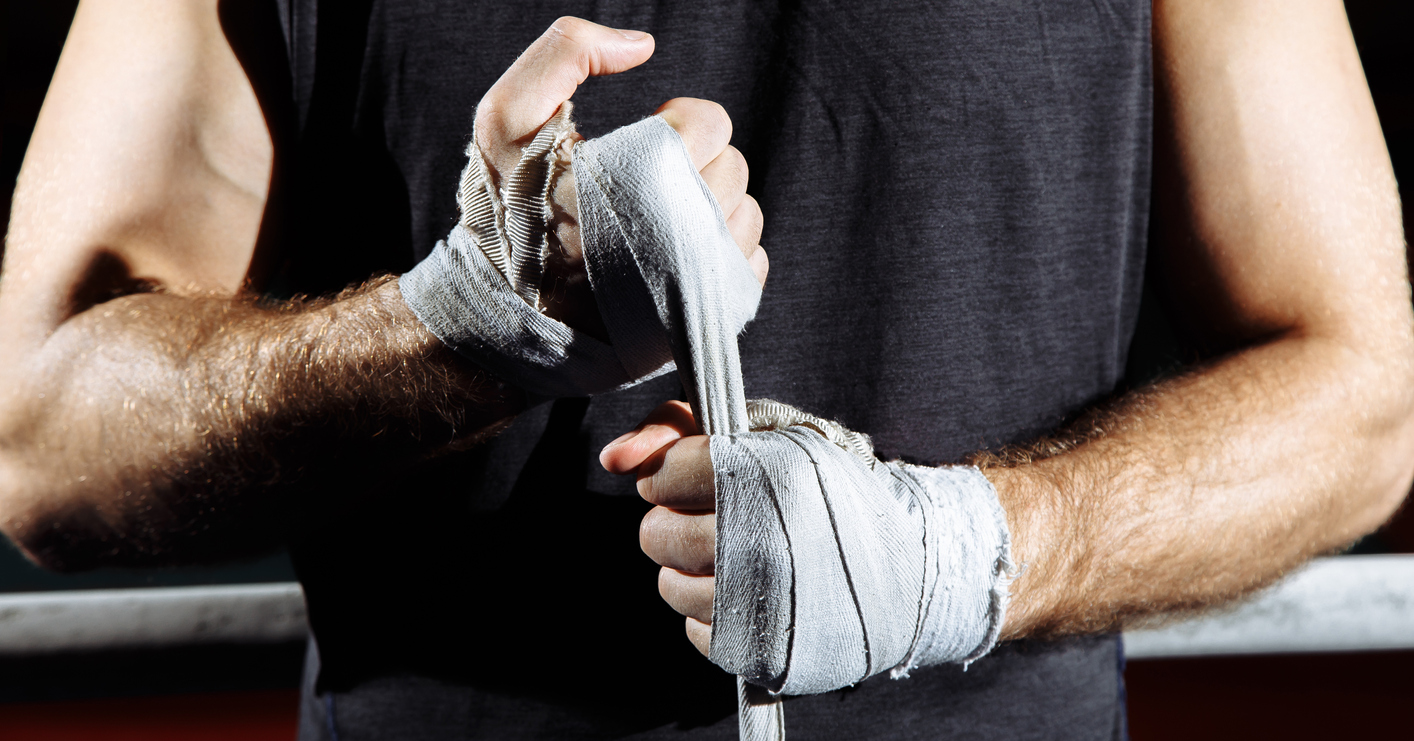 "Conservatism" is no Longer Enough

All hands on deck as we enter the counter-revolutionary moment.

most people living in the United States today—certainly more than half—are not Americans in any meaningful sense of the term.

I don’t just mean the millions of illegal immigrants. Obviously, those foreigners who have bypassed the regular process for entering our country, and probably will never assimilate to our language and culture, are—politically as well as legally—aliens. I’m really referring to the many native-born people—some of whose families have been here since the Mayflower—who may technically be citizens of the United States but are no longer
Click to expand...

This is fascism folks. And it’s our #1 threat to our democracy. Until we address the ugly hatred and bigotry being spouted everyday by Republicans and their propagandists, we’ll continue to see more senseless attacks on our government and on our communities.

Al-O-Meter said:
The undeniable fact is the most racist people in America are on the political left.
Click to expand...

How do you measure "most racist"? Because almost all of the people who discuss racist tropes are on the right.

List two people, out of thousands, is virtually a defining example of "outlier".

For every person of almost no political power you list, we can point to three Congressional Republicans promoting naked racist ideologies like the "great replacement". Further, I think you already know this. I wonder how you can live with yourself while being so nakedly hypocritical and two-faced.

One Brow said:
List two people, out of thousands, is virtually a defining example of "outlier".
Click to expand...

Richard Spencer and Jason Kessler aren’t outliers. The whole movement is socialist. The media does a good job of publishing images that omit pieces that give away the game. They’ll post images of some white loser parading around with a Confederate flag, holding up symbols most don’t know, or if there is a banner it is often in a shot in which the middle word is hard to make out. The text of the article or talking heads will tell everyone they are right-wingers. It is fake. Nearly always that confederate flag holder is a socialist and a Bernie Sander supporter.

Here is who they really are: 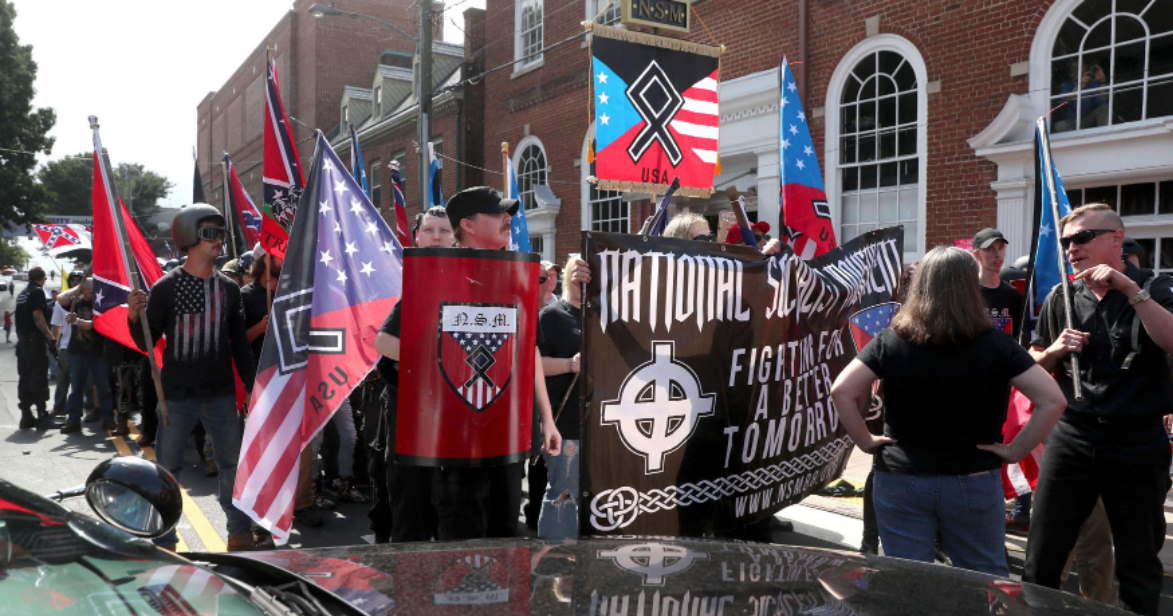 The NSM (National Socialist Movement) was the primary organization at Charlottesville. The racist shooter in Buffalo who is the subject of this thread, he called himself a socialist.

IDGAF if the guy is a socialist or a republican, or a socialist Republican or anything else. None of this distracts from the fact that he almost used Tucker Carlson's words verbatim. That many (most) Trumpers support the exact ideas that he expressed in opposing "white replacement" and that this is where we're going if Trumpism continues.

I don't and have never really associated Trumpism with the Republican party other than that's the party that gave his ideology a home and now many establishment Republicans are fully in bed with the movement. Trumpism is NOT conservatism in my opinion. It is a form of white, fundamentalist (extremist) Christianity, that exists specifically as a reaction to women's rights, ethnic minority rights, LGBTQ+ rights. One of their main motivating factors is to reverse equality of non-Christian white people because they see loss of their unequal privilege as fundamentally unfair because they think this is "their" country and it is their natural place to gain the greatest advantages from what it has to offer and sharing is essentially a loss of their special rights.

So who ****ing cares if their collectivists or libertarians? They are my enemy regardless.

Gameface said:
...and that this is where we're going if Trumpism continues.
Click to expand...

This Buffalo shooter is 18 so he didn't vote in the last election, but in 2020 these ethno-socialists almost across the board abandoned Trump. When Trump cut Bannon, they bounced. This is where we are going if Bernie and AOC continues. Social group collectivism is poison regardless of the ethnicity being advocated for. I'm glad to hear these scum are your enemies. I'll leave it at that.

I'm aware of what you're posting.


Al-O-Meter said:
Nearly always that confederate flag holder is a socialist and a Bernie Sander supporter.
Click to expand...


Al-O-Meter said:
... but there seems to be something about being race obsessed that seems to make socialism more appealing.
Click to expand...


Al-O-Meter said:
Ibram X Kendi, who makes his entire living playing up issues of race, is socialist and on the political left.
Click to expand...

He also views race as a social construct, not a biological reality.


Al-O-Meter said:
The BLM founders are socialist and on the political left.
Click to expand...


Al-O-Meter said:
... I can point to because there are thousands of these socialist bigots.
Click to expand...

Recognizing the existence of a social construct, and it's deleterious effects, does not make one a bigot.

One Brow said:
Not everyone who describes themselves as a socialist is a left-winger.
Click to expand...

I agree with you. On a side note, Nazism was a movement that called itself national socialism, a concept that in German language was Nationalsozialismus, hence the sound "natzio/e" .

addictionary said:
I agree with you. On a side note, Nazism was a movement that called itself national socialism, a concept that in German language was Nationalsozialismus, hence the sound "natzio/e" .
Click to expand...

Of course. But as we all know or at least should know, that was merely a front to attract new party members. Socialism wasn’t actually a priority of the party. Especially once Hitler consolidated his power as the party’s leader and Otto Strasser (one of the left leaning Nazi leaders) left the party (and country).

Then, in 1934, shortly after Hitler became chancellor, the actual socialist parties were outlawed and many of their leaders were arrested, beaten, and sent to concentration camps. In other words, the Nazis weren’t socialist. Neither were their policies from 1933-1945.

Folks, we really need to stop falling for stuff like this. David Duke “left” the KKK in 1980 to found the NAAWP to Mimic the NAACP. Folks on the far right constantly do this. From feigning support for Israel to imitating black civil Rights groups. They’re trying to troll the left and draw the “both sides” reporting from the media. The kkk can’t be bad if they can be equated with black civil rights movements. BLM can’t be good if they’re equated to the kkk, right?

Racists trolling the left goes back years ago. You find examples during slavery where slave owners accused abolitionists of hypocrisy, claiming that the lower class workers were treated worse in the cities than enslaved blacks weee on southern plantations. Again, a complete troll job. here’s an example from the 1960s of racists trolling their political opponents 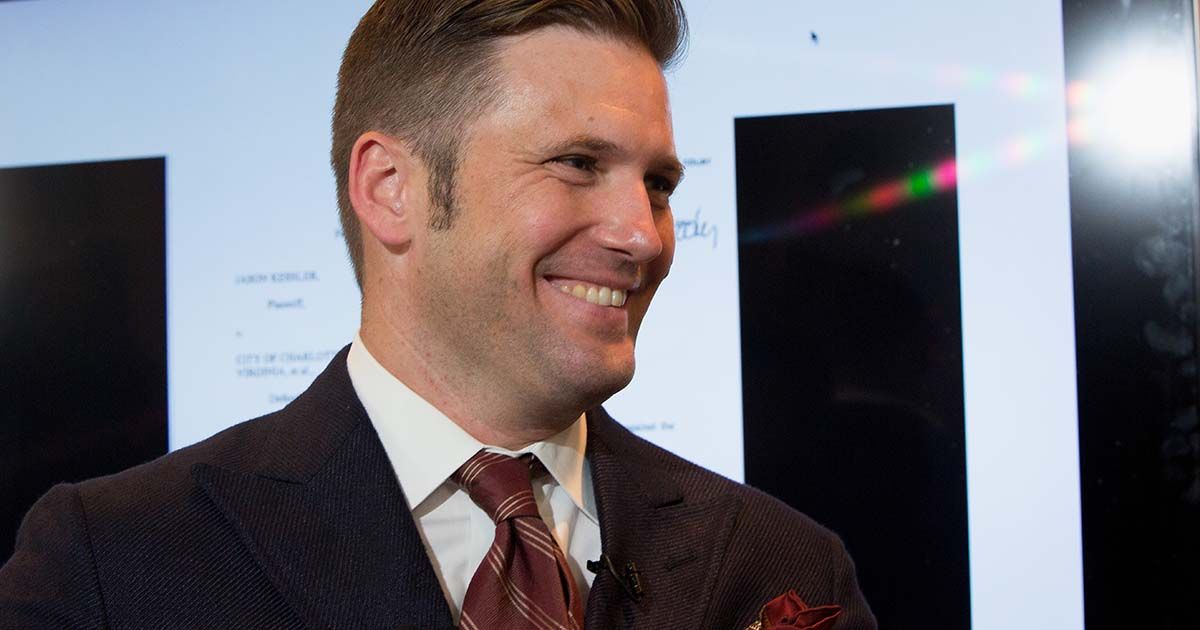 It’s time to stop falling for transparent trolling by neo-Nazis. Here’s how to know when they’re misleading you.

And again, who’s been spouting white supremacist rhetoric? Well… here’s a picture of his reaction when The NY Times accused him of white supremacy:


And here’s a clip of him providing the shooter with his manifesto (this reads almost word for word the same. Go ahead, look it up):